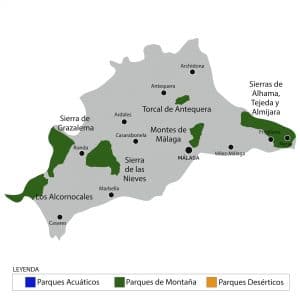 El Caminito del Rey (The King’s Little Pathway) is a walkway almost eight kilometres long built on the walls of Los Gaitanes gorge. In addition to the route on roads, the main attraction is the three kilometres of footbridges suspended at a height of even one hundred metres above the river course of the Guadalhorce. This makes it one of the most spectacular and attractive walkways in Spain, even in Europe.

However, until its most recent remodeling it was one of the most dangerous paths in the world. Both expert mountaineers and some reckless locals have lost their lives there. That is why it was only permitted for true climbing specialists. The renovation was awarded the Europa Nostra 2016 prize for the best recovery, being chosen both by the professional jury and by popular vote.

The construction of El Caminito del Rey was an initiative promoted by the Sociedad Hidroeléctrica del Chorro (a company that produced hydroelectric power from Málaga). This company needed a passage that would overcome the mountain in order to facilitate the work of the workers of Salto del Chorro and Salto del Gaitanejo plants. Improvements works that began in 1901 lasted till 1905 because of its great difficulty. In 1921 King Alfonso XIII came to inaugurate the  Conde de Guadalhorce reservoir and crossed the walkway. It was given the name Caminito del Rey thereafter.

El Caminito del Rey deteriorated over time until a full renovation of the walkway was truly needed. Its narrowness and dangerousness motivate the inhabitants to degrade its name to just “caminito”. Once reinforced, El Caminito del Rey re-emerged as one of the most attractive natural areas in Spain. From then on, the security measures are very extensive and there is no danger to walk the Caminito del Rey.


In addition, from the large vertical walls that hold up the footbridges, part of its stratigraphy can be seen thanks to the effect of river erosion, that is responsible for the many caves in the area. El Caminito del Rey is located in the natural site of El Desfiladero de Los Gaitanes. It is a natural area of great diversity carved on the rock of the Sierra de Huma. It has a rugged relief with large water bodies of the Guadalhorce, Conde de Guadalhorce and Guadalteba reservoirs (where kayaking is allowed). Likewise, there are numerous forms of active tourism in the area.

The vegetation are mainly endemisms and communities of Aleppo pine, holm oak, eucalyptus and Phoenician juniper (arâr). As far as their fauna is concerned,  the birds of prey are the most common in the area. There are examples of griffon vultures, Bonelli’s eagles, peregrine falcons and eagle owls. Blackbirds and swifts fly in the areas closest to the riverbed. On the other hand, the mountain goat lives on the steep ground of the gorge.

Tickets to do El Caminito del Rey must be purchased online. Since some weekends tickets are sold out, you could book a room in a nearby hotel. They usually have some for their guests. Bear in mind children under eight must be accompanied by their parents and that there are no bathrooms or places to satisfy your physiological needs intimately. It is also worth mentioning that the access is through a tunnel without light about two hundred meters long.  Furtheremore, the tunnel is not even two metres high in some parts. We recommend you to take a flashlight.

It is important to plan the time needed to do El Caminito. It usually takes two hours once you have crossed the entrance door and collected the obligatory helmet. However, you must be there one hour before your booked time.

There are two options to do El Caminito. The first one is a round trip in order to go back to the car park. The other one is a one-way trip. At the end of El Caminito, there is a bus waiting to take the hikers in 20 minutes to the north entrance where they left the car. It is a half-day plan as it is worth taking it easy and take binoculars to gaze at the rock walls and the birds of prey that fly over the area. Do not forget the camera either.

Fianlly, El Caminito del Rey is close to two beautiful villages. On one hand, Ardales (where El Caminito del Rey is located, but it also has the important archeological site of Bobastro). On the other hand, the fortified Antequera (a city with impressive churches and prehistoric tombs). Several mountain roads such as the M-226, the M-444 or the M-447 go to the quarter of El Chorro, near to the gorge. Many hikers combine this visit with that of the nearby Torcal de Antequera.


Where to eat and stay in the surroundings of El Caminito del Rey:

Andalusia, hiking, Málaga
It may interest you...