In the 11th century, the inhabitants of Ribadeo (on the coast of Lugo) saw a huge fleet approaching the coast searching a place to land. Immediately they sent an emissary to warn the bishop of Mondoñedo, the ruler of those lands.

At that time, the bishop was Don Gonzalo, an old man and venerated by all who had previously been abbot of the Royal Monastery of Sahagún (León). Although the etymological origin of the Germanic name Gonzalo is “totally willing to fight”, war was not among the inclinations of this bishop.

In front of such alarming news the bishop met the town council in which they appeared the most prominent personages of Mondoñedo; and after listening to them he decided to put himself in the hands of God. He asked for a cross and with it he hurried towards the coast, to meet the invaders. Along the way he met numerous inhabitants of the coastal towns, who fled in terror. He told them about the need to have faith, because he felt that it was the only thing that could save them from those pirates. He managed to reassure them, and then he convinced them to accompany him to pray together for their salvation; singing litanies with great devotion they all went in procession towards the coast.

They ascended in procession to a hill, from which they could see the huge enemy fleet. The bishop stopped and directed a fervent prayer of the group of the faithful, who continually prayed to God for their salvation. At the end, they watched in amazement as the wind had increased, forming huge waves.

The bishop continue walking, ascending by the path to another hill closer to the coast. He stopped again and all together again they prayed fervently for their salvation. The gale intensified even more, forming even bigger waves that engulfed some boats.

Already very close to the coast, from the Alto de la Grela the storm was so tremendous that you could not see what was happening in the nearby sea. That is why the bishop asked about the number of ships that remained afloat. They replied that there were still three of them, so the bishop fell on his knees and began again to pray piously until the last boat was wrecked.

At that moment the storm began to subside. The witnesses of those events, amazed, as thanksgiving, erected a hermitage in the place. Today it is known as the Ermita do Bispo Santo.

Another version of this story even specifies the phrase that Gonzalo pronounced when such an unusual event took place: “Let us ask God to allow us to be always free and we can take this happy new throughout Galicia.”

As the pirates drowned without reaching land, their filiation could not be clearly established. Some think they were Normans, others that it was the pirate Moor Abdelhamuyt’s ships, who had been defeated by then. Recently, the Foz authorities have decided to promote a commemorative party in mid-June, adopting the Normans as invaders.

These facts were only the beginning of Gonzalo’s miraculous trajectory. Some time later, he faced with the convenience of having water nearby. So the bishop threw a “zapato” (shoe) in a place from which water emerged. The place would be called, appropriately, from then A Zapata Fountain. Logically, due to these prodigies, Gonzalo ended up being canonized and those places, linked to his person, are still considered today as very miraculous by the natives of the country. In the museum of the Romanesque church of San Martín de Mondoñedo is the sepulcher of San Gonzalo – Bispo Santo as it is known here – as well as its ring and its crosier.

Texto by Ignacio Suárez-Zuloaga and illustrations by Ximena Maier. 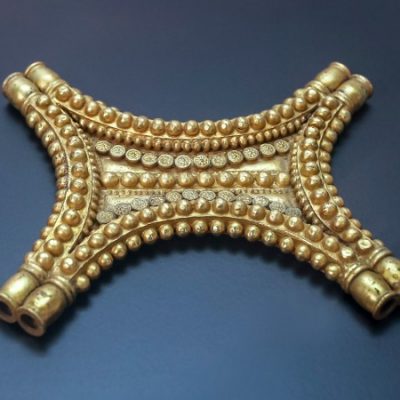