History is purely human and therefore is more likely to be forgotten than it should. It is not necessarily an erasure. On several occasions it is ignored. This happened to the Solis expedition. A story that seems to be the prequel to Cannibal Holocaust, the famous gore film. Ambition, adventure and roasted sailors in the context of the much-honored discovery voyages arising from the Treaty of Tordesillas. It is hard to resist applying in this case that terrible cliche ‘reality beats fiction’.

A matter of spice

Glory, telling the history and so on are elements that time has put together with expeditions like Solis’. All very romantic, very Hollywood and discourse of exaltation, whether national or human. Just as that small step for man, big step for Humanity was the result of the United States wanting to paint the Russians’ face, the first circumnavigation of the planet was the result of rivalry between the Spanish and the Portuguese for the control of the spice traffic. Cloves and pepper was where the fortunes were. Before Magellan and Elcano there were attempts, like the protagonist of this article. 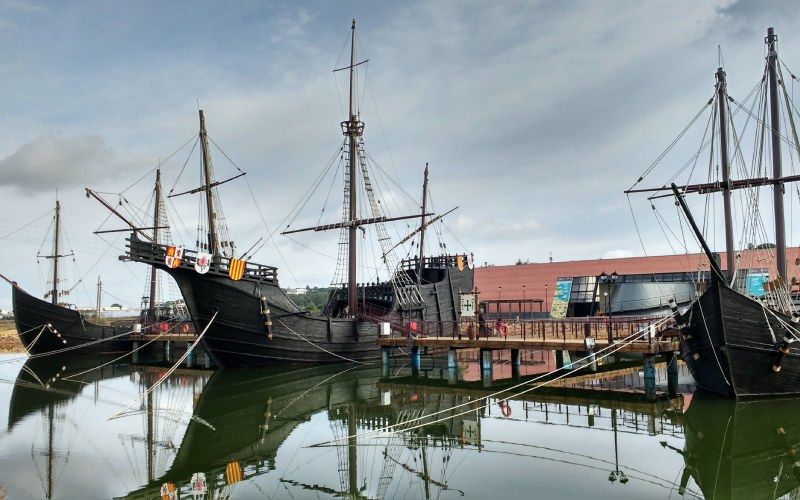 These types of ships starred in the era | Shutterstock

Ferdinand the Catholic, always underestimated, saw the potential of the American continent. Although the Portuguese neighbours had cheated them with Tordesillas and had all the African coasts exclusively for themselves, he had a hook in his jaw ready. Since the New World was not Asia, there had to be another ocean in between. It did not take long to find it. Portugal was in shock when the news was confirmed.

Keeping Africa meant, before Columbus, that the maritime trade with the spice islands was all theirs. But the Pacific and America meant that the Castilian-Aragonese had an alternative all to themselves. Thus, the crown got to work and commissioned several expeditions. The mission of Solis was to find a passage to the south of the new continent to reach the Moluccas.

A seasoned captain for a secret mission

At the end of 1514, Juan Díaz de Solís received the chance of his life. It was on November 14 when he signed the settlements that gave rise to his exploration. The captain was a veteran who had already been to overseas territories. His expertise was demonstrated when he was appointed chief pilot of the Casa de Contratación de las Indias. He succeeded Amerigo Vespucci himself. Therefore, he received secret royal support to go to terra incognita. Ferdinand II of Aragon put money, cannons and armor on the table. Three caravels would be the ships commanded by the sailor of unknown origin. 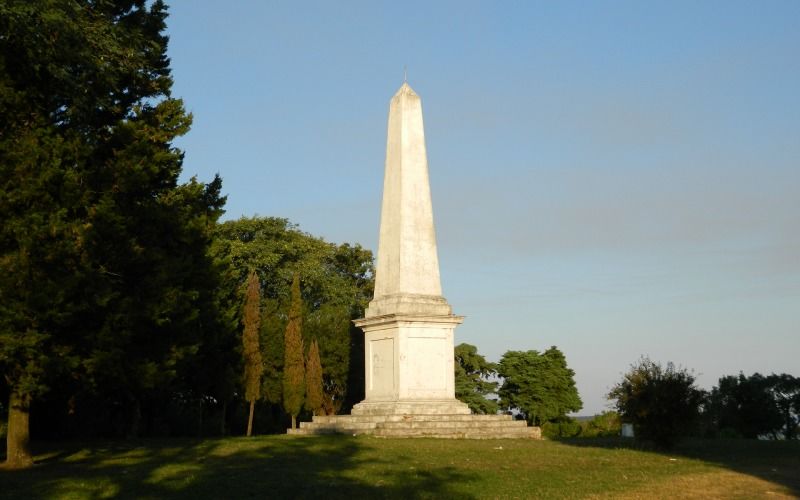 At least they would end up building a monument to Solís, like this one in Uruguay | Wikimedia

They had to play dumb so that the Portuguese would not find out anything. But John II, the Portuguese king, had many spies. That’s why he eventually got to know the affair and decided to engage in sabotage. Between traps and preparations, Solís took his ships from Lepe to Seville. One of the caravels was so loaded that it sank. Thus, the departure from Sanlúcar de Barrameda was postponed from June to October 1515. Nevertheless, they managed to leave with approximately 60 sailors.

After the mandatory stop in Tenerife, Solís and his men sailed for Brazil. It was Christmas time when they reached the other side. Hence, many of the milestones to which they gave their names have to do with this peak time of the year. He had several interactions with the aborigines. The goodwill was going to change a little when they advanced south. 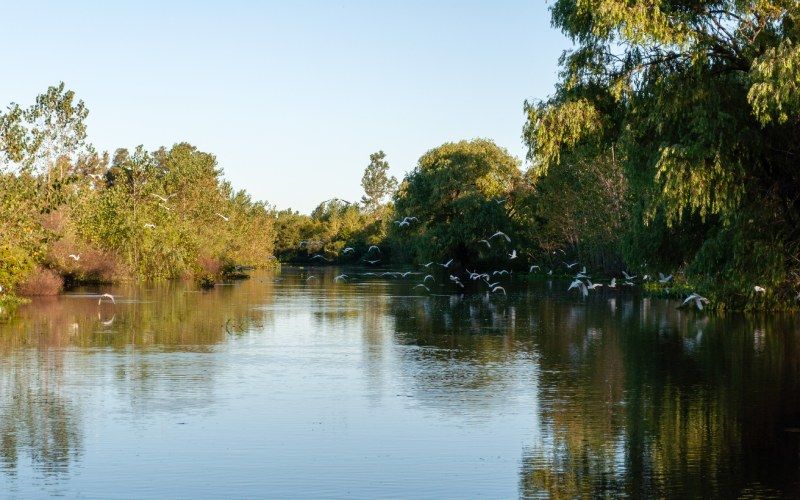 The La Plata River can be very inhospitable | Shutterstock

The road to an Amerindian barbecue in Solís

Among islets, bays and so on, the Solís expedition ended up reaching Rio de la Plata. They believed that this could be the coveted passage to the east, even though the water was fresh. As there was no GPS or satellite maps, the only solution was to make use of the caravels, whose shallow draft meant that they could go by river or sea. But the Solís River, which was the name of this estuary of the Paraná and Uruguay rivers before its current name, hid horrors.

Death would catch Juan Díaz Solís on January 20, leaving a boat. It was not early in the morning. He had gone as far as Juncal Island, in the area where the waterways meet. He had seen some aborigines and decided to go with some men to meet them. His intention was to make some exchange of goods and if he could convince someone to go with him to Castile. Not in vain, it was the first time a European had met them. 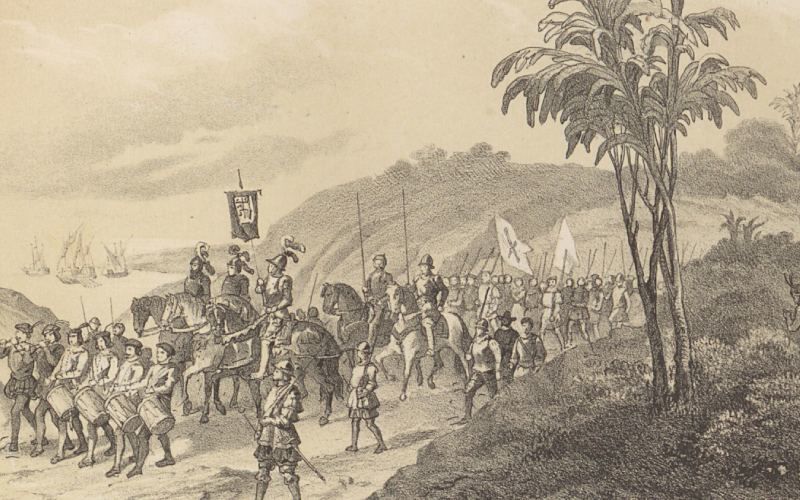 In the beginning it was all about laughing and conquering islands, such as San Sebastian | Wikimedia

It is most likely that they were Guarani instead of Charrua, as was believed at the time. If anyone wonders why such a proposal was made, it is because they were cannibals. The good Solís must had been so surprised when the Indians began to shoot arrows at them. The story was told a century later by the chronicler Antonio de Herrera. The boat’s crew was soon overwhelmed and all but one cabin boy died. From the caravel they were hallucinating. They could not help them, since the ship‘s cannons were out of range.

But everything was going to get worse. Not happy with killing the Europeans, they hacked them to pieces. They made sure the sailors saw everything. Their plan was like that of so many Spaniards in summer, to have a barbecue. They set up some coals, took the torso of the murdered and roasted it. Then they feasted. The caravel decided to turn around and so did the expedition. A brother-in-law of Solís, Francisco de Torres, would take charge of it. 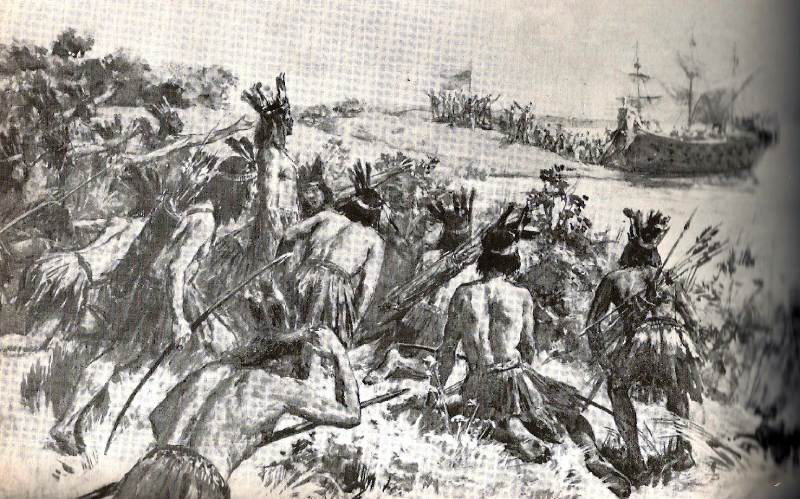 Whether they were Charrúas or Guaraníes, they were up to no good | Wikimedia

Thus the glorious voyage of Juan Díaz Solís ended, in the same place as some sausages and ribs. Magellan and Elcano would arrive at the place about five years later and would be more cautious. The Portuguese would also be killed for being a cocky, but farther away, in the Philippines. Elcano would become a world hero by completing the first circumnavigation. What happened to the young sailor who was not killed by the Indians is even more curious. But the story of Francisco deserves a separate post.