In these months when cold is the protagonist, there is nothing better than a good stew to help us get warm. Spanish cuisine has the advantage of having several dishes of this type made up of vegetables, meat or fish, with their consequent high contribution of nutrients. Thus, below we review some of the most traditional stews in Spain; where you can appreciate the presence of fish on the coast and the more intense presence of meat in the interior. 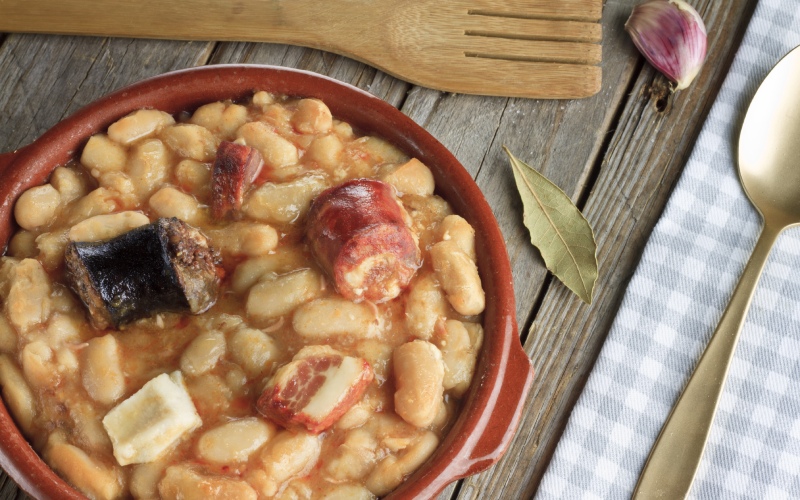 Asturian Fabada is one of the most typical winter dishes in Spain and the star of the Asturian cuisine. It is believed that its consumption began in the 16th century, when fabes were planted in the province. However, written references to this dish do not appear until the 19th century. To prepare the fabada, the Granja variety is used, a bean that is perfect for this dish as it is very buttery. Moreover, as it is a simple recipe, it is best to choose good quality ingredients to achieve a flavour very similar to those that can be found in Asturias; therefore, the key is in the beans and the chosen sausages (blood sausage, chorizo, pork).

Here you have the recipe for Asturian Fabada

Olla podrida (literally “rotten pot”) is one of the most renowned stews in its history; with mentions of outstanding authors such as Cervantes, Lope de Vega and Quevedo. Its name is misleading, as the term olla podrida is believed to come from olla poderida (pot of the powerful) referring to the fact that only the wealthy could access a dish with so many ingredients. It is a typical dish from Burgos and can be considered the mother of all stews made with vegetables, legumes and meat. The ingredients of this stew are perfect for the coldest days.

Here you have the recipe for Olla Podrida 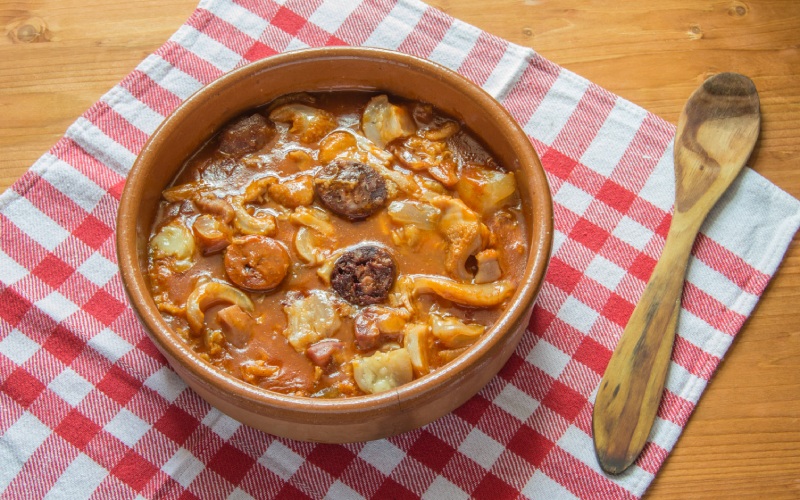 The recipe for Callos a la Madrileña is the dish par excellence of the Community of Madrid. It takes several hours to prepare and it is recommended to take it the next day so that all the flavours are well blended. Callos are a dish that has gone from being one of the main tavern stews to being a recipe that is widespread throughout Spain, with a characteristic touch in Madrid. Thus, like most traditional recipes, the different regions have their own version. Moreover, it is considered a cheap dish due to the low cost of its ingredients.

Here is the recipe for Callos a la Madrileña 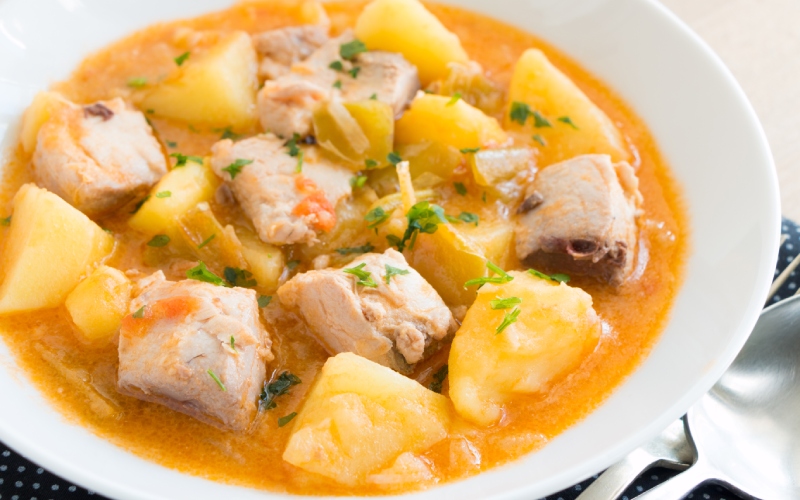 The recipe for Marmitako, whether it be bonito or tuna, originated from Basque fishermen whose boat’s cook used the food he had on hand to prepare dishes for the crew. The name comes from the word marmita, the container where they prepared this delicious recipe. Marmitako is a tuna stew with potatoes, peppers, tomatoes and onions; very easy to prepare and with very good nutritional properties.

Here is the recipe for Marmitako

When temperatures drop there is nothing like enjoying a good Cocido Montañés from Cantabria. This indoor stew is made with cabbage, white beans and a generous compango. The latter consists of ribs, chorizo, bacon and blood sausage. Unlike other stew recipes such as the lebaniego or the madrileño, the cocido montañés is not prepared with chickpeas. Moreover, all the ingredients are eaten at the same time.

Here is the recipe for Cocido Montañés 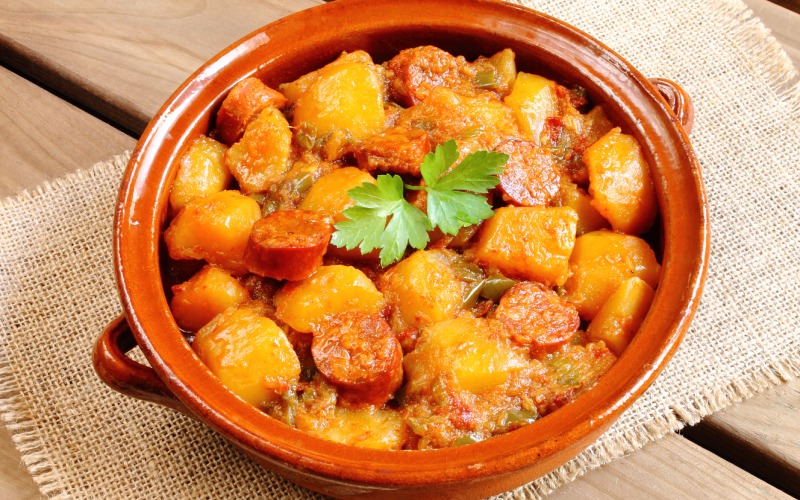 In the colder months, one of the typical winter dishes that are best enjoyed are Rioja-style potatoes or potatoes with chorizo. As their name suggests, they come from La Rioja and are a humble stew with very few ingredients, simple and inexpensive. As it is a caloric dish, it was the ideal meal for the workers who worked in the fields; although it has now become one of the most traditional potato recipes. The mixture of chorizo, potatoes, choricero peppers and paprika results in a strong and tasty stew, which improves if it is left to rest from one day to the next.

Here is the recipe for Patatas a la Riojana 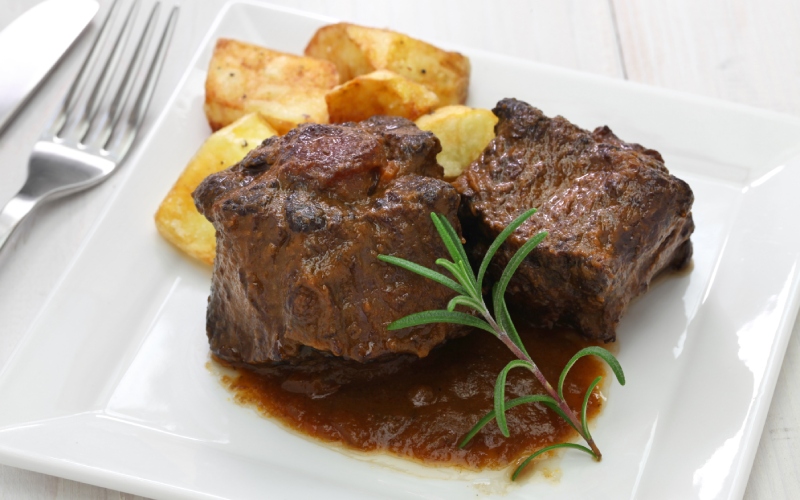 The recipe for oxtail is traditional from Córdoba, although it has spread to Andalusia and even to the whole of Spain. It is a dish of humble origin that has been part of Spanish cuisine since the 16th century. At that time, the brave bull’s tail was prepared after the bullfights; a piece that the bullfighters gave away as a gift because they considered it to be a “casquería” (a type of meat); this contrasts with the value it has acquired today. The preparation of this meat and vegetable stew is simple; although a lot of time has to be spent to get the desired result.

Here is the recipe for oxtail 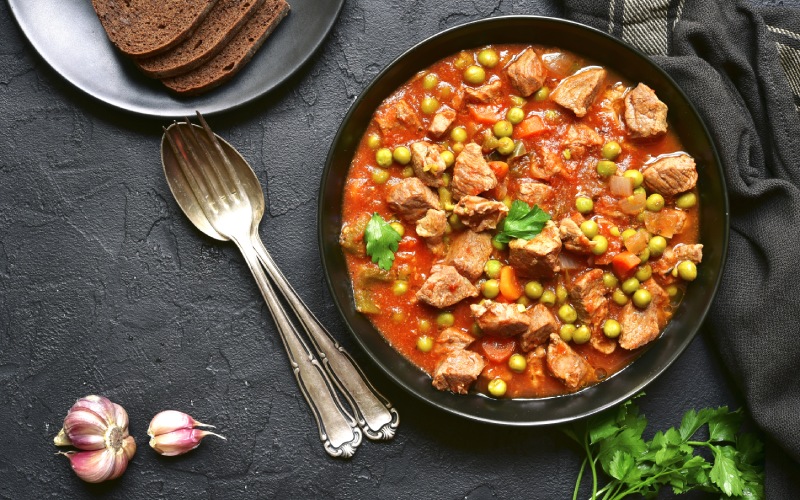 Carcamusas make an excellent stew that is mainly made in Toledo. It has lean pork accompanied by seasonal vegetables, such as peas. Some sources place its origin in the Bar Ludeña in Toledo. According to popular culture, it originated here from a pun. The bar was usually attended by older men known as the carcas, as well as by young girls whom they considered to be muses (musas). The dish, as it appealed to both audiences, was called carca-musas.

Here is the recipe for Carcamusas 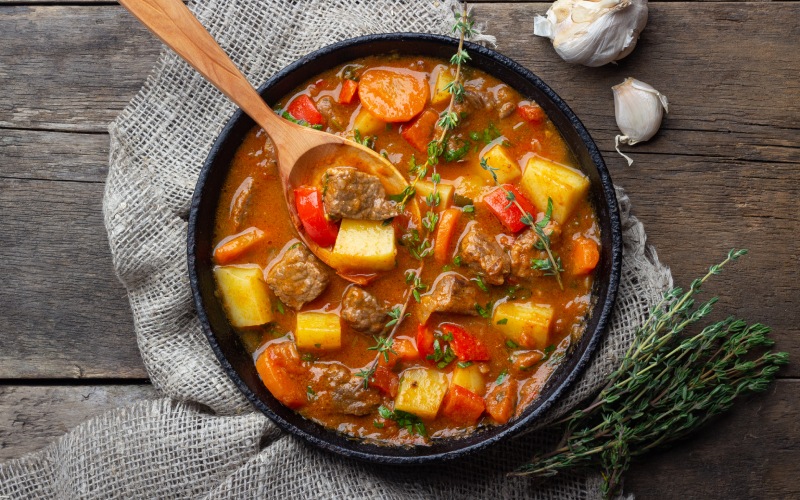 Calderillo Bejarano is a typical stew from Béjar and the province of Salamanca, although its popularity is such that it is prepared throughout Castile and León. It consists of a beef stew that is cooked over a low heat with potatoes, green pepper, onion and bay leaf, as well as a little paprika. The secret is to prepare it without rushing, as it requires a couple of hours. The result is worth it: a forceful dish that finds a great ally in the bread; essential to appreciate its delicious sauce.

Here is the recipe for Calderillo Bejarano 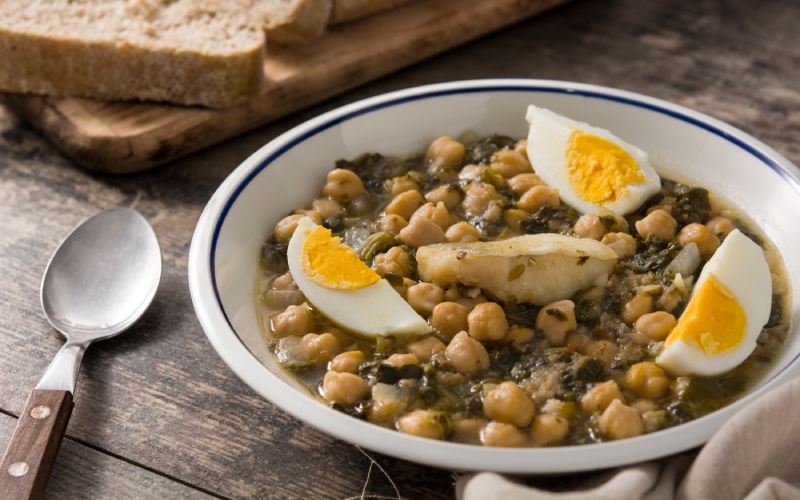 Potaje de Vigilia is traditional on the Fridays of Lent in Spain, when meat is not an option for some. However, it is also eaten throughout the year as it is perfect for colder days, with a high protein content thanks to the cod and chickpeas. It is a stew that is prepared from a sofrito, soaking it in broth and cooking the vegetables. Then the cod and ingredients such as spinach or hard-boiled eggs are added. A recipe that cannot be missed during the Holy Week.

Here is the recipe for Potaje de Vigilia